Clutter- a bit of a mess right now

So far, we’ve looked at Clutter’s:

I’d like to take some time to dive into the health of the company from an employee satisfaction standpoint.

Clutter is a fast-growing, venture-backed company, and so is subject to growing pains

Full disclosure, I worked at a fast-growing startup in the SF Bay Area called Zenefits. For context on how fast it was growing, I joined at about the 300 employee mark, and in 6 months, I believe we were celebrating passing the 1000 employee mark and breaking ground for a new Arizona office.

This experience had its ups and downs. For anyone interested in the Zenefits saga, I like to direct people to William Alden on Buzzfeed, whose coverage, in the moment felt personal and directed, but in retrospect I have to admit was on the money.

And sometimes the growing pains are stealing employees’—excuse me, independent contractors’—wages. Sometimes they are shutting down with so little notice that vendors are left asking the question whether they were intentionally left unpaid. Sometimes they are holding layoffs right before the company IPOs.

If you look at the company’s Glassdoor, you’ll see a fairly rosy 4.1 overall. But if you click into the handy little Ratings and Trends tool, you’ll see that over 2018, the company took a nosedive. 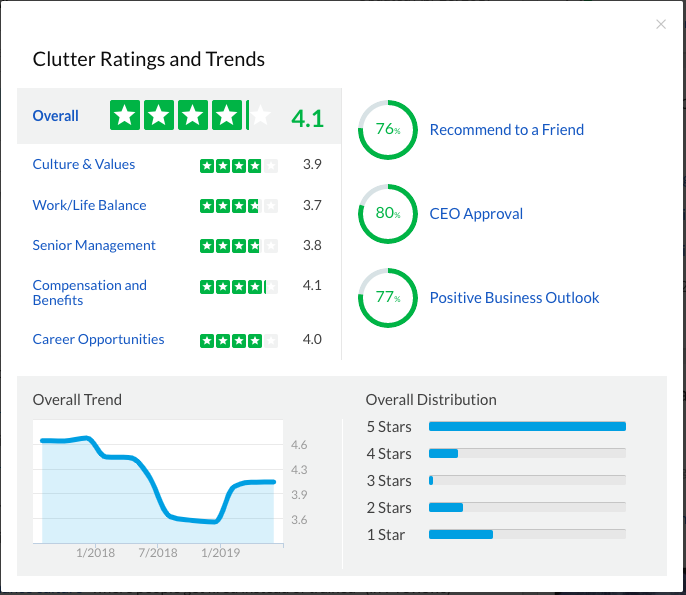 Here are some highlights:

Nobody listens to you. You’re a body that they will grind until you say uncle. Once you do, they’ll replace you faster than they hired you. You’re just a pulse to get a task done. Link

Hire and retain more females and underrepresented minorities, they too have college degrees and perfectly functioning brains. Link

Customers have been leaving the Clutter nest for more traditional storage offerings. That is not a good sign. The “churn” ratio has not been kind to the company. The business plan here, once though to be great, will fail in the end. Link

Just all of the 10+ cons listed this review. Pastebin here for easier reading of the list)

As an aside, you can also see a string of reviews in early September that were all 5 stars. Why is it that HR or whoever is tasked with leaving positive reviews never tries as hard as employees leaving negative reviews?

As an aside to an aside, I wonder if there’s any potential in a cottage industry popping up around brushing company Glassdoor reviews? Pay me $50K for 1 month and I’ll come to the office and work, and leave a couple of glowing positive reviews at random times citing different aspects of the culture

Lastly, can I just say that this review is hilarious? 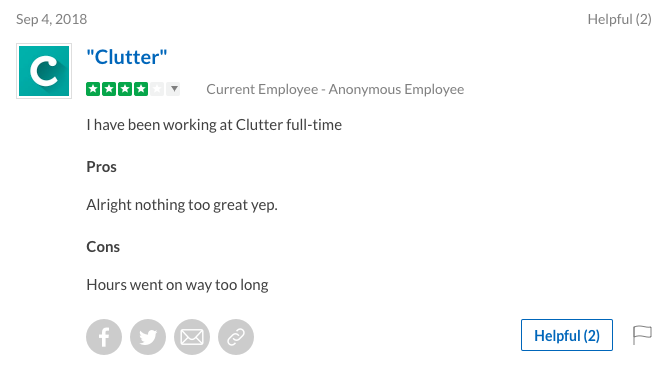 Risks of having disgruntled employees

The fault doesn’t lie with the employees, but with the company

I take pains to say here that none of the above points should be blamed on the employees. I believe that managers+ (“+” meaning higher-level such as VPs, Directors, and C-levels)should be concerned primarily with the wellbeing of their direct reports.